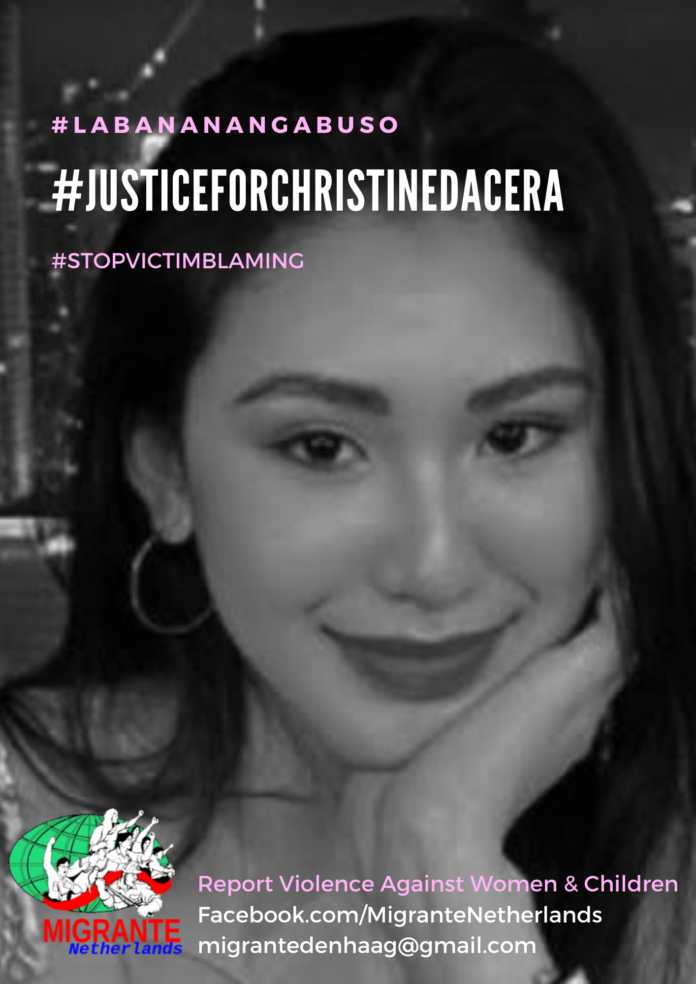 We, Filipinos in the Netherlands, express our support to the family of Christine Dacera in seeking for truth and justice behind her death. Rape jokes, impunity of perpetuators and violence against women should be stopped.

Dacera, 23 was found lifeless in the bathtub of a hotel in Makati, Metro Manila and was declared dead upon arrival in Makati Medical Center. Authorities said that there were indications of sexual assault.

While three of the eleven suspects are already in police custody and are being charged of homicide and provisional rape, Dacera’s case should not be considered a closed-case already as the police said.

We also support Cong. Arlene Brosas, Gabriela Women’s Partylist representative, in filing a House Resolution to probe the alleged rape-slay of Christine Dacera and to continue to register the widest indignation over rising cases of sexual abuse and violence against women.

Rape occurs every hour in the Philippines according to the Center for Women’s Resources. Rape happens because there are rapists under a feudal-patriarchal society wherein machismo and rape-jokes are even tolerated or promoted by a nation’s leader himself.

In September 2018, US navy Joseph Scott Pemberton who was convicted for the murder of transgender Jennifer Laude benefitted pardon from Pres. Rodrigo Duterte.

In a speech in Mandaue province, Pres. Duterte said: “As long as there are many beautiful women, there will be more rape cases”, referring to the reported high number of rape cases in his hometown Davao. During the election campaign, he also said that, “The mayor should be the first”, referring to the rape case of an Australian missionary. Worst, he also explicitly told the military to “Shoot them in the vagina”, referring to women members of the Philippine New People’s Army who are fighting for women’s emancipation and national democracy.

We stand against all forms of exploitation, discrimination and violation of human rights happening in the Philippines and elsewhere.

ABOUT US
MIGRANTE Holland works for the basic interests of migrant Filipinos in the Netherlands. It defends, protects and promotes the rights and welfare of Filipino migrant workers, in particular, and overseas Filipinos in general.
Contact us: [email protected]
© Copyright 2020 - MIGRANTE HOLLAND