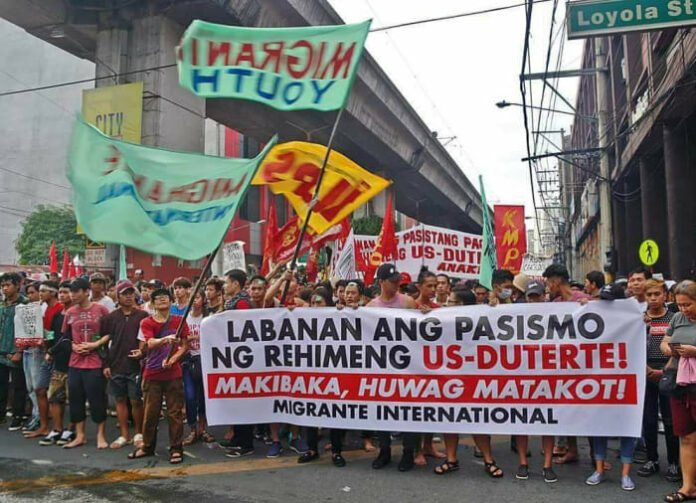 As we salute the working women all over the world on International Women’s Day, Filipino women migrants reaffirm their stand for the ouster of the tyrannical, militarist and corrupt regime of Duterte!

Years have passed since Duterte assumed office in Malacanang but women migrants continued to suffer from various forms of exploitation and continuously treated as commodities for export. Like the majority of the working and peasant women, Filipino women migrants are denied their rights to a just wage, right to land, right to a secure and decent livelihood and right to access free social services such as healthcare and education. Filipino women migrants had spoken – enough is enough! Duterte must be out of Malacanang!

Government neglect persists among Filipinos overseas especially for thousands displaced, stranded or died because of the pandemic. Notwithstanding, Filipinos are forced to risk their lives and leave their families through the Duterte government’s Labor Export Program which plunges them into deeper economic crisis as they undergo training and pay exorbitant fees required by unscrupulous employment agencies on top of other fees exacted by Philhealth, POEA, OWWA, DFA, NSO, NBI and other agencies created to extort from the poor Filipinos. Economic heroes indeed!

In Hong Kong, an increasing number of Filipino women migrants are being terminated from work and suffered not just for losing employment but even in returning home. Their flights are cancelled and have no place to stay while waiting for the next available flight schedule. They became stranded migrants in need of temporary accommodation but the Philippine government remain silent about their plight.

In the Middle East, particularly in Saudi Arabia, cases of Filipina migrants who run away from their employers because of maltreatment, non-payment of salary and different forms of abuses, among others are being reported on an almost daily basis. It’s been happening since the labor export program of the government started and it continues to happen despite Philippine government promotions of unified contracts among others. In 2020, the situation of Filipina migrants in the Middle East worsened as the COVID 19 pandemic spread throughout the region and worldwide.

Young Filipina women who were first brought to UAE end up being trafficked in Syria. It took them years before their voices were heard. Last year, MIGRANTE International together with UMC Philippines held a press conference to expose and demand for their repatriation. We learned that aside from being trafficked, their handlers in Syria, even staff of the Philippine Embassy, are reportedly extorting money from them with the promise of repatriation. These are trafficked women and they were victimized not just once but several times.

Despite the reported cases of increasing job terminations and different forms of work schemes as a result of the global crisis and widespread pandemic, government cash relief efforts end up in empty promises to many who were not able to receive the first trance of DOLE-AKAP.

”What is more distressing though for women migrants is the unforeseen danger behind the evils of trafficking such as the case of Mary Jane Veloso, who for ten years now continue to languish in a jail in Indonesia. Despite strong indications that Mary Jane is innocent, President Duterte’s administration did not actively pursue and exhaust all efforts to protect and defend the rights of Mary Jane as a victim of human trafficking. Additionally, President Duterte has not appealed Mary Jane’s case to the Indonesian authorities for pardon or clemency. Mary Jane’s case exemplifies the grave government neglect experienced by Filipino human trafficking victims, and the long, arduous journey victims have to undergo to achieve justice.

On February 7 this year, Jerlyn Isah Quisumbing, 24-year old woman seafarer, fell overboard in a vessel while preparing a gangway for MB Santa Clara, Flagship Denmark and has gone missing until now. Her mother, Rossana Lozada Quisumbing, is appealing for help to investigate the case of her missing daughter but her call for help seems to fall on deaf ears.

Yesterday, several activists including women were murdered and arrested in different places in Southern Tagalog. According to reports, 9 activists were murdered and 6 were illegally arrested at the crack of dawn by combined forces of PNP and CIDG. MIGRANTE International condemns these lawless actions by those in authority which only show who are the real terrorists in this country. Furthermore, we are one with the families of the victims and other progressive organizations demanding justice and calling for immediate and unconditional release of those arrested.

MIGRANTE International believes that as long as the regime of Duterte stays in power, Filipino women including migrants will continue to suffer from state terrorism, government neglect, discrimination and various forms of abuses. Indeed, the struggle of the working class women in 1909 to fight against oppression and inequality and other conditions in the form of feudal and capitalist exploitation hold true today. We need to strengthen women and peoples movements along with international solidarity in order to survive and win the struggle.

ABOUT US
MIGRANTE Holland works for the basic interests of migrant Filipinos in the Netherlands. It defends, protects and promotes the rights and welfare of Filipino migrant workers, in particular, and overseas Filipinos in general.
Contact us: [email protected]
© Copyright 2020 - MIGRANTE HOLLAND