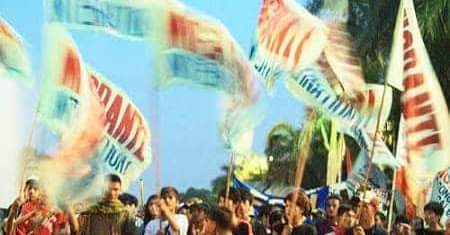 Migrante International condemns the vicious crackdowns on leaders of workers’ unions, farmers’ organizations, women groups and other legal democratic organizations while enforcing enhanced community quarantine (ECQ) in designated provinces including NCR. Instead of providing much needed health services and addressing the alarming rise of COVID cases during this period, the Duterte government turned Holy Week into “Huli” week.

Overseas Filipinos fear for the safety and security of their families in the Philippines as they hear stories of rights defenders being subjected to extrajudicial killings, illegal searches and arrests, interrogations all while in the midst of alarming and unprecedented rise in COVID cases in the country and no clear plan and direction developed by the Duterte regime to address the serious health crisis.

While these human rights violations are being carried out, overseas Filipinos and their families are suffering from the calvary imposed by the Duterte regime during this pandemic. Filipino migrants abroad are experiencing grave government abandonment and criminal neglect as they experience lack of livelihood, hunger, lack of temporary shelter, abuse and discrimination with little to no assistance from the government. Hundreds of land and sea-based migrant workers continue to be stranded in their host countries and at sea with their health deterioriating because of the slow repatriation assistance, while human trafficking and illegal recruitment victims like those in Syria have yet to see justice in their cases.

Instead of providing much needed financial, food and other forms of assistance and support to secure the health, safety and livelihood of our overseas Filipinos, the government is occupied and wasting the people’s resources on hosting seminars conducted by the National Task Force to End Local Communist Armed Conflict (NTF-ELCAC) in order to demonize and spread lies against progressive and democratic organizations that legitimately serve and respond to the needs of our fellow kababayans in distress.

Despite the difficulties and dangers, thousands of Filipinos are forced to continue to seek employment abroad and leave their families behind because of the lack of economic and livelihood support and sustainable jobs in the country. And despite their ongoing agony, the Duterte regime continues to rake in profits from overseas Filipinos through mandatory government fees from PhilHealth, SSS, Pag-ibig, OWWA membership while no one is still being held accountable for corrupting the 15 billion-peso funds committed by Duterte’s PhilHealth minions.

Filipino migrants say enough is enough! It is time to end Duterte’s ineptitude, greed, fascism and quest to perpetuate power together with his relatives or chosen ones. It is clear that the Duterte regime does not give a damn if our people die from his war on drugs, extra judicial killings, hunger and poverty.

Duterte has clearly failed to protect the Filipino people from the pandemic through increased mass testing and contact tracing, support for our health care frontline workers and hospitals, accelerating the roll out of the national vaccine program and procurement of more vaccine supplies, and providing consistent economic aid and livelihood support for all.

Therefore, Filipinos overseas reaffirm our commitment to join all sectors of Philippine society in the movement to oust Duterte!