Sept. 21 Global Day of Action Against Fascism in the Philippines 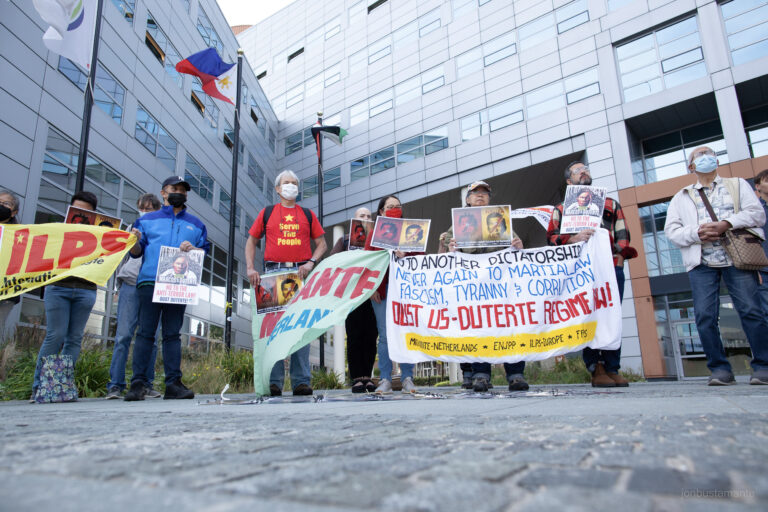 Migrante Netherlands joins its allied Migrante chapters, peoples’ organizations and other peace and democracy-loving compatriots in staging today’s Global Day of Action Against Facism in the Philippines.

This action is to remind the public about the historical truth about the Marcos dictatorship.

We oppose the comeback of the Marcoses into politics. We will expose the lies and deceit about the roles and the benefits that they reaped during the dictatorship.We also reject current Philippine President Rodrigo Duterte, who has fashioned himself in the same mould as the fascist Marcos, seeking to perpetuate himself in power to avoid future persecution for plunder and crimes against humanity; using the Philippine Army and Police to to silence critics and opposition, including legitimate activists, media and progressive individuals; and appointing many retired military and police officials to key cabinet positions. The Philippines is now under a de facto military rule, with Duterte sitting at the helm.

With elections coming up next year, the family and cronies of the dictator Marcos are seeking to return to political power. The Marcoses are using all their resources to cleanse their public image by using public relation gimmicks to spread their false narrative. They have also found a friend/ally/patron in Duterte. He has allowed the burial of the dictator Marcos remains in the Heroes’ Cemetery, granted political favors Marcos cronies, and openly refers to the late dictator as a ‘great leader’ to ensure some of the Marcos’ wealth will find its way into his vice presidential campaign fund.

Duterte has announced that he will run for Vice President, even saying that it will grant him immunity from any suit, including the ICC case. He has now retracted his anti-Visiting Forces Agreement posture against the United States to ensure the continuing support of his American imperial master in the following election.  We remind the public not to believe his promises. Duterte failed to deliver his campaign promises when he first ran for public office in 2016.

His promises include include personally riding a jetski to the West Philippine Sea to confront China, eradicating drugs and criminality. ending corruption in government, higher wages, and affordable food for all Filipinos. In fact, the problems that he promised to solve has become much worse.

He has practically conceded to China on the West Philippine Sea issue thereby surrendering our country’s sovereignty. As a reward, China has granted the Duterte administration onerous high-interest loans and a donation of China-made Sinovac vaccine. He has also allowed the entry of Chinese investments in Philippine Offshore Gambling Operations (POGO) and the entry of an estimated 150,000 Chinese POGO workers into the country.

Recent news reports indicate that this influx has also created exclusive Chinese rest-and-recreation business such as restaurants, massage parlors, illegal brothels, and even a gun shooting range.Criminal drug syndicates boast of their connections in government by posting selfies on social media with their ‘padrinos’ in govenment. Drug lords such as Wu Tuan, Jameson Ching, Peter Lim, and Herbert Colangco, who are protected by high-ranking police officials. No high value drug dealers have been arrested and imprisoned. His so-called War on Drugs has already caused the death of more than 30,000. Most of the victims are small time users and petty runners of pushers have become tokhang victims.

Corruption has flourished in most govenment offices at all levels. And finally, many poor Filipinos have become poorer especially when the pandemic hit because of the loss of livelihood resulting from the lockdown and ineffective measures to deal with the pandemic.

We call on all kababayans, all peace and freedom loving Filipinos to stay vigilant and reject the  Duterte, the Marcoses, and their cohorts and cronies this coming electoral exercise. We have to unite to ensure that these criminals masquerading as politicians do not get away with all the crimes that they have commited against the people, and crimes that they are responsible for.

Truth must prevail and justice must be served!

NEVER AGAIN TO MARTIAL LAW! DEFEND THE DEFENDERS!
JUSTICE FOR ALL VICTIMS OF STATE TERRORISM!MARCOS IS A TRAITOR!
NOT A HERO!STOP EXTRA JUDICIAL KILLINGS IN THE PHILIPPINES!
DUTERTE GUILTY!
OUST DUTERTE NOW!
SUPPORT THE STRUGGLE OF THE FILIPINO PEOPLE FOR JUST AND LASTING PEACE!