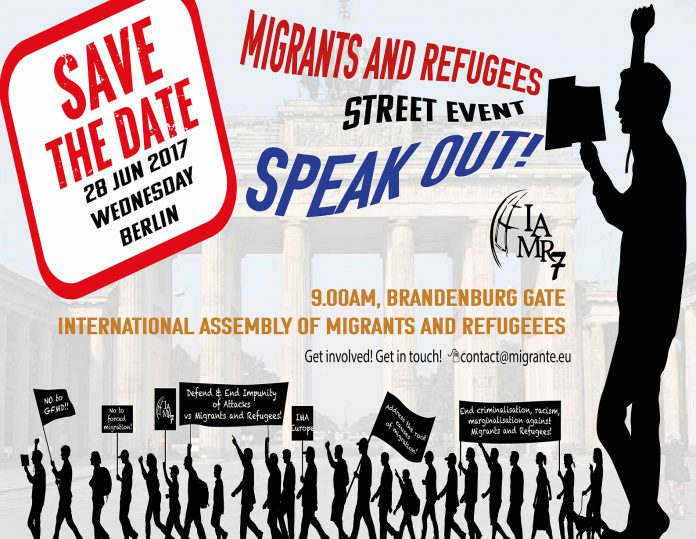 The SPEAK OUT STREET EVENT will be held in the morning of 28 June 2017, the official opening day of the Global Forum on Migration & Development (GFMD) that will be attended by high-­level and senior government policy makers. The IAMR7 will send a strong message to them regarding the continued marginalization of frontline peoples and communities affected by forced migration and human trafficking.

On this day, migrant and refugee communities will claim their space and assert their right to be seen and heard. It is important to give space to the voices that challenge the legitimacy and capacity of the GFMD to effectively address the problems and respond adequately to the challenges of migration and development. These grassroots and frontline communities will share their perspectives and solutions to the problems confronting them and engage
with policy-­makers in the parliament of the streets, bearing witness to their effective exclusion from decision-­making processes that affect them principally but which take place behind closed doors.

The event’s program will feature a speakers’ list composed of representatives from local and international migrant and refugee communities, their allies and advocates coming from the churches, trade unions, solidarity organizations, academe, the media, women and youth organizations, political parties and politicians, development and other civil society organizations.

Cultural performances (poetry reading, songs, street theater, chanting) will also feature in the program and will highlight the aspirations of migrant and refugee communities and the solidarity of allies and advocates from among the nationals of receiving countries.

Information materials will be disseminated to GFMD participants in order to popularize the position of frontline and grassroots migrant and refugee communities and energize advocacy and lobby initiatives among official and civil society stakeholders.

Finally, a unity statement will be read out and a ritual of commitment will express the resolve of frontline grassroots communities of migrants and refugees and their solidarity allies and advocates to address root causes and effect genuine change that will truly benefit their lives and that of their families, whether in their countries of origin or destination.