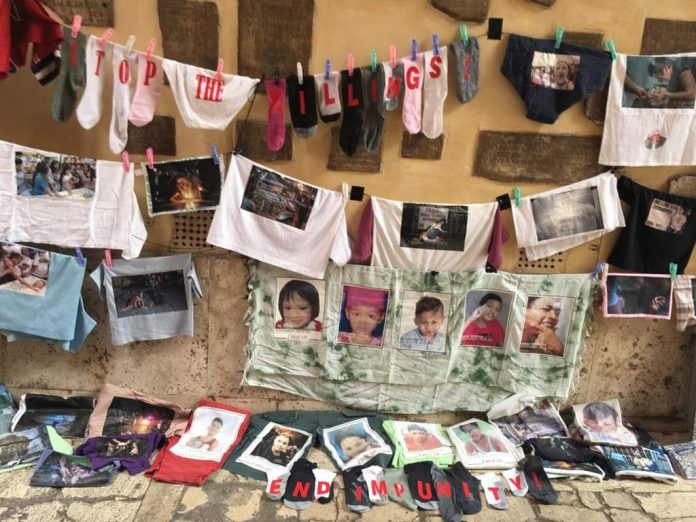 After two extra-ordinary performances of Tao Po which were well received by big audiences in Geneva, Switzerland and Amsterdam, the Netherlands, the ‘Tao Po’ performance will be shown today in Rome, Italy.

The most awaited ‘Tao Po’ will be staged in the historical center of Rome, in the courtyard of the Basilica di San Silvestro in Capite, Piazza San Silvestro 17A, today, Thursday, Oct. 10 at 7pm.

‘Tao Po’ is a play/monologue by award-winning theater actor and cultural activist Mae Paner also known as Juana Change, is about the untold heartbreaking stories behind the Duterte government’s “war on drugs.” Mae Paner gives life to four characters, in four separate monologues – a photojournalist, a ‘zumba’ dance instructor, an assassin and an orphaned girl.

The play is followed by ‘Talk Back’ panel discussion and dialogue with the audience, artist and members of Rise UP for Life and for Rights and their stories and the quest for justice.

In a radio interview of Ugnayan sa Himpapawid (wwwradiocittaperta.it) with Nardi Sabino of Rise Up and a team member of Tao Po Europe Tour, he said they hope to meet the communities who supported the Iceland resolution, and are eager to know how people will feel and respond to the call of the victims for justice after they watch Tao Po.

In another interview with Ms. Paner, she stressed that it was her idea to produce a play in response to the issue of extrajudicial killings that are happening in relation to the war on drugs, and decided to make the play, with writer Maynard Manansala. Together, they joined the ‘night callers’, photojournalists who are covering the war on drugs and had seen the actual events. Through Rise Up they were able to interview the families of the victims.

“We are hoping that many kababayans in Rome will watch Tao Po. It is high time for overseas Filipinos to know and understand what is really happening in our country and they need to know the truth about the war on drugs, after a number of the victims of the killings are families of migrant Filipinos”, said Umangat-Migrante chairperson Ed del Carmen.

More schedules of Tao Po in other cities: