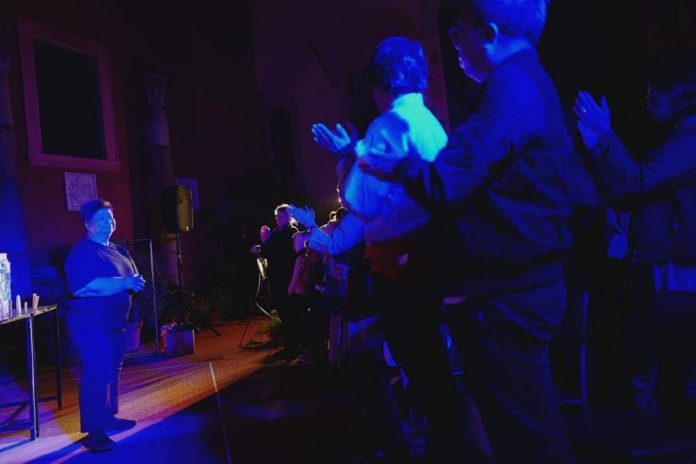 The Tao Po play was a resounding success with a big number in attendance that crowded the courtyard of the Basilica di San Silvestro in Capite, Piazza San Silvestro Rome last Thursday night, October 10, 2019.

Tao Po, an award-winning play by theater actor and cultural activist Mae Paner – also known as ‘Juana Change’, gave life to four characters in separate monologues – a photojournalist, a Zumba instructor, a police officer/hit man, and an orphaned girl, whose lives have been gravely affected by the government’s war on drugs.

According to the Philippine National Police (PNP), 22,983 deaths since the war on drugs began are classified as “homicides under investigation.” The exact number of fatalities is difficult to ascertain because the government has failed to disclose official documents about the drug war.

Human rights groups assert that the death toll has surpassed 30,000 with many cases either perpetrated by undercover police officers or hitmen under police supervision.

Last Wednesday, October 9, the Tao Po Europe team, Rise Up members Marissa Lazaro who lost her 20 year old son Chris in 2017 and Katherine Bautista who found her 21-year-old son John in a Manila morgue in January 2017, joined a crowd who waited for the regular public audience of Pope Francis on the grounds of the Vatican, and successfully handed a letter to an aide of the Pope. The letter was a request to the Pope to pray for their sons and for all the victims of the drug war.

Marissa and Katherine were both overwhelmed to see the Pope and have raised their hopes for justice because of this memorable encounter.

Marissa Lazaro while holding her son’s photo faced the audience together with other panelists, Fr. Noel Rosas of the Order of Carmelites, Sr. Beth Pedernal of the Scalabrinian Missionaries, Rubilyn Litao of Rise Up, and Mae Paner of Tao Po, in a related open forum.

For Sister Beth, Tao Po draws on compassion, that no one deserves to die without due process and was vocal in her advocacy to defend human rights, dignity, and justice.

“It is always the poor who are the victims. If change is to be achieved, why not implement genuine land reform, and stop the forced migration of Filipinos? Justice for the poor!” said Father Noel Rosas.

Noel Aragon from the Duterte group observed that the videos shown were pure propaganda against the Duterte administration and that it seems only the poor are being killed, that there are important facts which were not mentioned in the videos like the police forces who were also killed, the rape victims of drug addicts, and some well-to-do people who were also apprehended because of their involvement in drugs.

Rubilyn Litao of Rise Up acknowledged that the previous administration was not able to address the drug problem, and it was a revelation for them from the church people that there are communities in the Philippines where the drug problem is rampant. So she invited everyone to the Tao Po call to become a venue to gather together for the common interest.

Nardi Sabino also from Rise Up stressed that as long as the policy of liberalization of the government continues because of the country’s membership to GATT-WTO, the drug trade will continue, where imported goods freely pass through customs with fewer restrictions. But the question he said is do the killings resolve the problem on drugs? As long as the root causes of poverty are not addressed the poor will always be vulnerable to drugs.

Ms. Mae Paner expressed her sadness over the black propaganda against her. Prior to the performance, in social media and facebook, some Duterte groups tagged her as a member of the CPP and a terrorist. She was called by many names. She stressed that she is an artist and a cultural activist. She’s here to show four narratives of four people who had been killed. The killings are real. Whatever person you are, an addict, or whoever, they deserve due process because they are human. So she’s knocking on our door. To open our minds and our heart.

Mother Mary John Mananzan of the Benedictine Sisters also stressed that there is now an erosion of moral fiber in the Philippines. The lost of respect to people…to life… to the law (example of how Sereno was removed from office by the Supreme Court) …the lost of respect to the truth (the truth for many is actually fake news) and the loss of morality. It is beyond politics. We are being called to defend our dignity as human beings.

Another impressive part of the event prior to the performance was the exhibit of t-shirts with photos of the many victims who had been killed since the President took the office in 2016. It has attracted many passers-by. For those who were unable to watch ‘Tao Po’, the exhibit served as an eye-opener for those who didn’t know about the brutal killings in many parts of the country because of the drug war of the government.

The Tao Po performance had its run in Vienna, Austria yesterday, October 12 and was an also a great success and watched by more than a hundred people.

Once again, Mae Paner, impressed the audience with her outstanding performance.

In the interview today, October 13 by Ugnayan sa Himpapawid with Migrante Austria Chairperson Manuel Sarmiento, he said that the event there “was overwhelming!”. He said the big attendance was unexpected. He also said the panelists during the open forum were able to answer the questions raised by the Duterte groups.

Sarmiento invited everyone to open their eyes, not to believe in fake news and to support the call to stop the killings in the Philippines and to end the drug

War, which has victimized many innocent lives.

Today at 3pm, the Tao Po Discussion will be held at Amerlinghaus, Stiffgasse, 1070 Vienna.

In London, the United Kingdom, Tao Po will be staged at the Brunei Gallery, Lecture Theatre Hall, SOAS on Wednesday, October 16 from 18:00-20:00.

The Tao Tour in Europe is strongly supported by Migrante Europe and its chapters in the region.

The Tao Po Tour in Europe is a joint effort of Rise Up, Juana Change Movement and the International Coalition for Human Rights in the Philippines. #

Coordinators of PINAS FIGHT NA! – Pinoy in Austrian Society to Fight Tyranny and for Nationalism