PAARALANG MIGRANTE: Webinar on Defending the Defenders of Human Rights in the Philippines 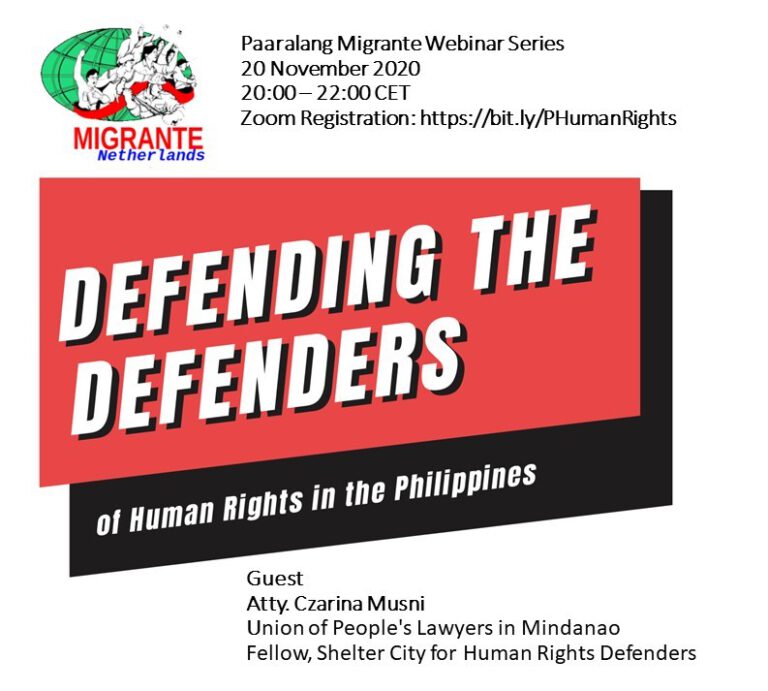 Filipina lawyer Czarina Musni is in the Netherlands as a fellow of the Shelter City for Human Rights Defenders. She will share in the webinar her work with the Union of People’s Lawyers in Mindanao and how the lives of human rights defenders in the Philippines are always at risk.

In June this year, the United Nations High Commissioner for Human Rights presented its report on grave rights abuses in the Philippines under the leadership of Pres. Rodrigo Duterte.

The report finds that national policies on illegal drugs, national security and countering terrorism under the Duterte regime has resulted in “systematic human rights violations, including killings and arbitrary detention, persistent impunity and the vilification of dissent”. “Widespread and systematic” extrajudicial killings, has resulted in tens of thousands of deaths including the urban poor people, human rights defenders, farmers, community organizers, activists, civil society groups and media outlets.

In response to the resolution, the European Union has, in September, threatened “to revoke its trade preferences to the Philippines because of “the seriousness of the human rights violations” committed by the Duterte administration. This is in reference to the EU GSP+ incentive.

Paaralang Migrante (Academy for Filipino Migrants) is an initiative of Migrante Netherlands Den Haag in its effort to raise awareness and promote the rights and welfare of migrants. The school also offers free online Dutch lesson. To join the next session, please do the Intake here: http://bit.ly/PaaralangMigranteRegistration. 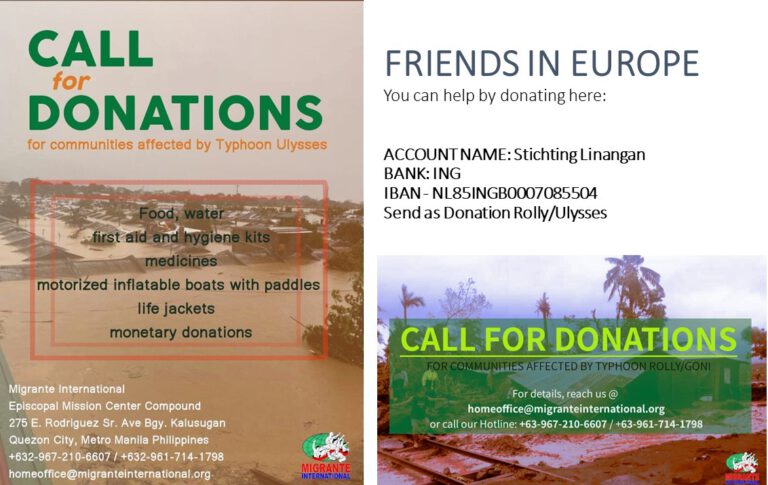 Please help us raise donations for people in the Philippines affected by strong storms that hit the country in November.

Are you able to donate? Whatever amount counts. We thank you for your support to the Filipino people in need!

Is your family in the Philippines affected? Please send a message to migrantedenhaag@gmail.com. 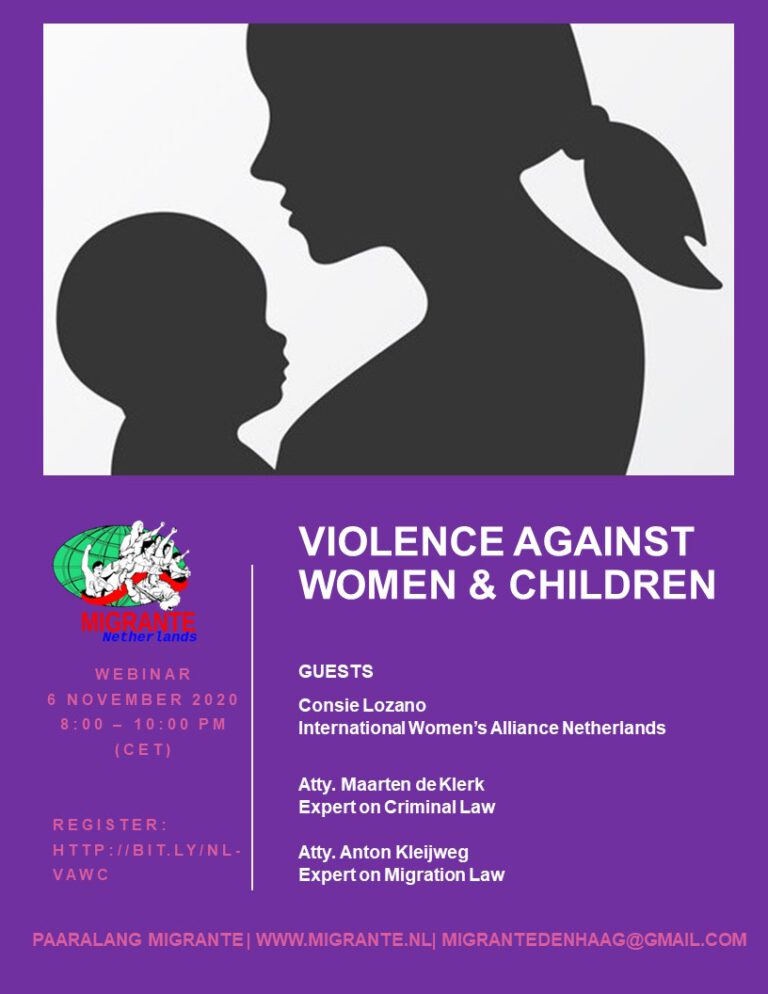 Violence against women and children is not allowed in the Netherlands.

Do you know that it is your right to speak about it and report it to your doctor and the police?

Do you know that even though yo are undocumented or that you have no permanent residency in the Netherlands as a migrant, you can file a case against an abusive partner or employer?

Be aware of the various forms of abuse. Know your rights as a migrant, woman and mother through the webinar, Violence Against Women and Children: Criminal Law and Humanitarian Appeal for Migrants in the Netherlands.

The webinar is offered by the Academy for Filipino Migrants, an initiative of Migrante Netherlands Den Haag in its effort to promote the rights and welfare of Filipinos migrants.

Paaralang Migrante: Webinar on Healthcare and Fighting the Corona Crisis in the Netherlands and the Philippines 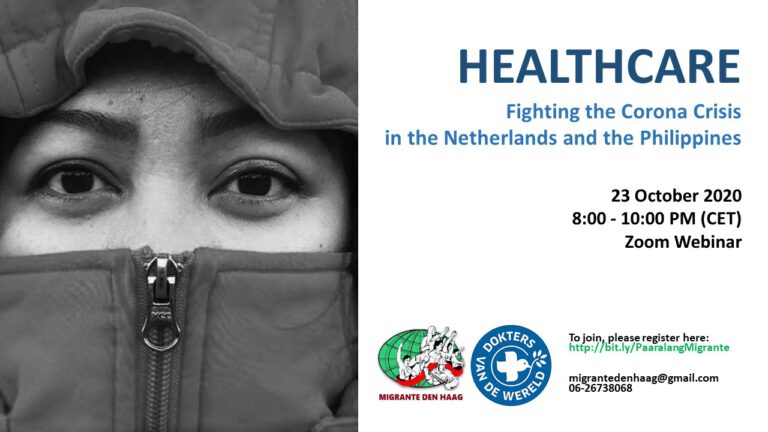 What are the latest updates about the research on Covid-19 vaccine? What are the new measures as well as healthcare services in the Netherlands that all Filipino migrants should know? If you are not registered with a doctor or if you do not have an insurance, what should you do when experiencing symptoms of Covid-19?

How do we understand the current situation in the Philippines? Does the Philippine government’s response to the corona crisis help in resolving the chronic problem on healthcare service, poor health and poverty in the country?

What can Filipino migrants do?

Migrante Netherlands Den Haag in cooperation with Dokters van de Wereld (Doctors of the World – Netherlands) invites all Filipino migrants to the webinar, Healthcare and Fighting the Corona Crisis in the Netherlands and the Philippines. It will be held on October 23, 2020 at 8:00 to 10:00 in the evening through Zoom.

To join, please register at http://bit.ly/PaaralangMigrante. 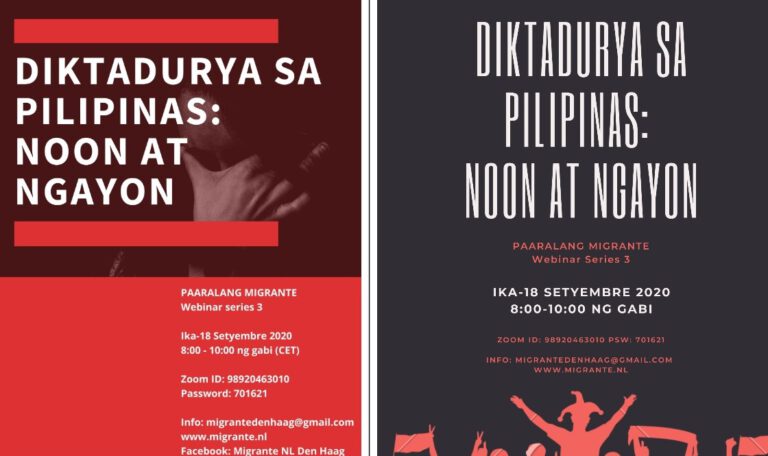 ***
School for Filipino Migrants Webinar 3: Dictatorship in the Philippines, then and now

On September 23, 1972, Pres. Ferdinand Marcos declared martial law in the Philippines. Media outlets were closed such as papers, radio and televisions. Thousands of people were imprisoned, tortured, disappeared and killed.

On May 23, 2017, Pres. Rodrigo Duterte declared martial law in Mindanao Southern Philippines. The community schools of Lumad indigenous peoples were bombed, the whole village of Marawi was burnt and thousands of people since then are imprisoned, tortured and killed not only in Mindanao but in the whole country. The huge media channel ABSCBN is closed while writers like Maria Reesa and lawyers like Benjamin Ramos are forced to silence.

Both Pres. Marcos and and Pres. Duterte have marked themselves as internationally renowned dictators.

What does dictatorship mean?
What does our history of struggle for change teach us? 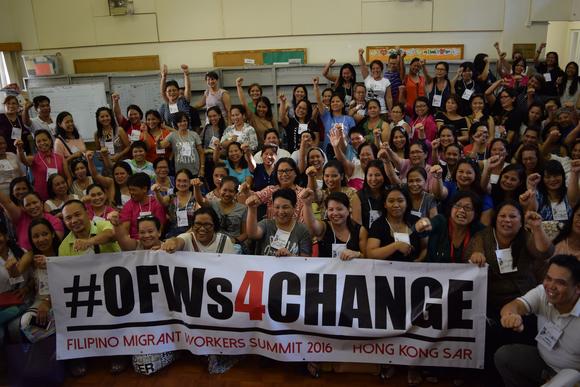 We congratulate you on your overwhelming victory in the May 2016 polls. The Filipino people have spoken, and they chose change.

You sweeping victory is testament to how Filipinos, wherever we are in the world, thirst for a new leadership that is not corrupt and cacique. We want a new government that will depart from all the failures and empty promises of the so-called ‘tuwid na daan’. We want accountability for all the crimes committed by the Aquino government against the Filipino people.

For these elections, despite and against all odds, a record-breaking 407,000 overseas Filipino voters exercised their right to vote and fulfilled their duty to the nation. This big increase is proof of overseas Filipino workers’ (OFWs’) stake in the outcome of the May 2016 elections. It disproved all claims that there had been a growing apathy among our OFWs. We have once again proven how significant the OFW vote is.

We are one with the Filipino nation in hoping that your presidency will immediately address fundamental problems that beset the country – widespread unemployment, lowest wages, contractualization, landlessness, lack of basic social services, corruption, violations of human rights and national sovereignty – the root causes of forced migration.

We are one with all OFWs in hoping that your presidency will scrap the labor export policy that exploits our cheap labor and remittances but offers us nothing in return, especially in times of need. We will hold you to your promise to make OFWs your top-most priority in your labor agenda. We want new leaders who will be nurturing to OFWs and their families.  We want a new government that will uphold and protect our rights and welfare.

We specifically call to your urgent attention the case of Mary Jane Veloso who remains on death row in Indonesia and others like her who have received no legal assistance from the previous administration; the immediate recall of notorious abusive and erring embassy officials, as well as accountability of high-level government officials responsible for the tanim-bala extortion scheme and other unresolved anomalies in the Ninoy Aquino International Airport (NAIA); the urgent and full audit of the Overseas Workers Welfare Administration (OWWA) funds and its immediate release to rightful OFW beneficiaries; the quick resolution of illegal recruitment and trafficking cases filed by countless OFW victims at the Department of Justice (DOJ), Philippine Overseas Employment Administration (POEA) and National Labor Relations Commission (NLRC); and, the scrapping of unnecessary fees that are viewed by our kababayans as nothing but ‘legalized kotong’, such as the abolition of the rubbish Overseas Employment Certificate (OEC), among others.

We are very much open to hold a dialogue with you to further discuss urgent and fundamental OFW concerns, especially as the nation is set to commemorate Filipino Migrants’ Day on June 7.

We dream of a society where families will need not be broken by the need to survive. We wish to come home to a country where there are opportunities for everyone to live decent and humane lives.

Mr. President, these are the changes we want to see in your administration. ###